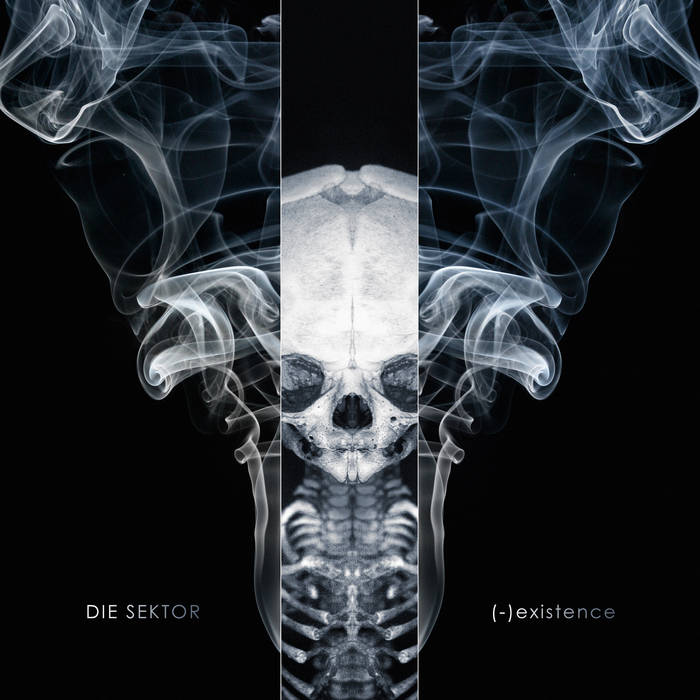 flowinglower The final piece of Die Sektor's The Void Trilogy, pronounced mathematically as, negative by existence," the album is by far their strongest, and most mature output to date. Uneclipsed by their enigmatic live shows, Die Sektor is your final electro solution. Favorite track: Blood I.

Chris This band just keeps getting better and better with every album. Amazing sound design, songs are strong and memorable and the production is always great. For me they carry the torch for bands like Numb and to me Existence is like a modern Blood Meridian. Favorite track: Nine.

Few bands make a splash in the scene with their debut album then promptly disappear for five years before as unexpectedly making a return – yet there are few bands on Earth anything like Atlanta’s DIE SEKTOR.

And what a return – seemingly eager to make up for lost time, since 2011 DIE SEKTOR have cracked out no fewer than 3 full studio albums and no less than 20 remixes to date (for the likes of SUICIDE COMMANDO, DISTORTED MEMORY, DYM, BLAKOPZ, FGFC820 and TERROLOKAUST) - remixes renowned for completely reinventing the original tracks…

This is a band almost literally on fire…yet apparently still not self-satisified enough to rest on its laurels.
Because now, following a second successive and successful summer of touring across their native USA, DWA is proud to present the Georgia-based 4-piece’s fourth album “(-)existence” – in an epic 2CD limited edition of 300, featuring an hour’s worth of additional material on the “(+)existence” CD2 remixed by labelmates DYM, SIN DNA, NITRO/NOISE and BLAKOPZ, recent touring partners FRONTAL BOUNDARY and CRYOGEN SECOND, DIE BRAUT (NoiTekk) and CYNICAL EXISTENCE (Alfa Matrix), hard dance heroes STUDIO-X, up-and-coming outfits CEASE2XIST and SIRUS, and the recording debut of CRYOGENIC ECHELON/RUINIZER side-project DREAM RECALL.

“To Be Fed Upon” immediately established DIE SEKTOR as an artist to watch out for back in 2006, achieving almost legendary status as the years rolled by and the band’s cult following began mourning the apparent demise of an act on which so much expectation had been placed.
Then, seemingly out of nowhere demos from the upcoming “Applied Structure In A Void” started appearing online at the end of 2010, along with remixes for CEDIGEST, DETROIT DIESEL and ALIEN VAMPIRES – and as suddenly as they had disappeared, DIE SEKTOR were back…with a vengeance.
Little more than a year later third album “The Final Electro Solution” was already out, yet even with an astonishing output of remixes and a seemingly-relentless touring schedule somehow DIE SEKTOR still found time to finish off their fourth and most accomplished album yet – the 66-minute masterpiece “(-)existence”.

Illustrated like “Applied Structure In A Void” and “The Final Electro Solution” by Greek artist Nikos Markogiannakis, and mastered like “The Final Electro Solution” by SOMAN’s Kolja Trelle, “(-)existence” is the closing chapter of DIE SEKTOR’s “Void Trilogy” – an album which both unifies and expands on the musical and lyrical themes of the 2 preceding records, and which is knowingly reflected in the artwork.

For the last couple of years, when releasing material in digipak or digifile (as accounts for the majority of our releases) we have skipped making booklets (which we did in the past). Some people said they missed them, and the additional graphical content they contained. Well, if you were one of those people, read on – because DWA’s “(-)existence(+)” 2CD limited edition, strictly limited to 300 copies, comes in a specially-designed 6-panel digifile with pocket-flap to accommodate the included 6-panel booklet.

Recently announced for their first-ever European performance at the UK’s prestigious Resistanz Festival in April 2014, DIE SEKTOR will at long last finally be taking their devastating live show across the ocean. Expect selected elements of “The Void Trilogy” and more. In the meantime, as with the massive promotional push we set in motion for TERROLOKAUST’s “Spit The Poison Out” earlier this year, we are now setting up a similar array of launch parties for “(-)existence” across Europe and Asia-Pacific. Interested promoters should contact us - and for North America WTII Records who are simultaneously releasing the album there.

“(-)existence” is released worldwide by DWA and in North America by WTII Records on November 12th.